So, I went up to Manhattan to visit some friends last weekend, which turned out to be quite the enjoyable and enlightening trip. We did drive, which is always a terrible idea when going into the city, but I was going with a friend who had just acquired a car. A car which was legitimately purchased from the very person I was visiting. I suppose there's a mix of reasons as to why he chose to drive despite my apprehension: nostalgia, boastfulness, just wanna drive a damn car after not having one for three months. The usual.

As absolutely everyone in the world is one-hundred percent sure about, 495N is a terrible drive, on any day of the week, between the hours of six am and midnight. Needless to say, it took us a great amount of time just to get out of that disgusting mousetrap. While in traffic, I decided to have a bit of fun with our destination buddies and send them "status updates" of our trip, to give them a better idea of when we'd arrive. And mostly to pass the time. Funny enough, even with fake updates to our gracious hosts (The tollbooths are on fire, we are delayed yet another hour - holy crap that car just flipped 40 feet from us!), they seemed unfazed. These sorts of absurd delays appear to be the norm to them, who have made the trip more times than I. Eventually, I 'fessed up. He still seemed apathetic. It looks like making all those road trips up and down 95 has made him a bit estranged.

Still, we arrived too late to really enjoy an evening out on the town on Friday, so we called it in fairly early and exhausted ourselves with the sheer power of bein' chatterboxes.

So anyway, the bright lights of Saturday morning rolled around, and we grudgingly got around to waking. High noon, I think it was, when three of us we decided to actually meander about and do something of substance. Character building, is what I think others call it. The fourth had to see a needy friend of hers, or something to that extent. Poo poo on her, indeed. So, around three we got out the door and headed into the city. We are, if you hadn't already received that impression, some serious lazy-sunday types. While I'm talking in tangents, I may as well make a mental note to stop referring to my friends as being ordered numerically... Oh, right, anyway, we did the usual city walkin' thing, hung out at Kidrobot and gawked at the overpriced yet attractive plastics, took the tour at our friend's fancy block-to-block workplace, and snacked at a decent corner joint. It was all quite fancy and fun until we decided to head to the Met and get thrown out for laughing at high art. 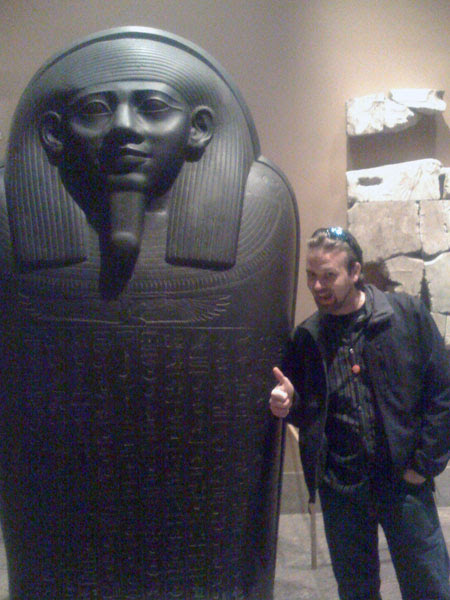 Mind you, all three of us are, at the core, art majors. We should be allowed to laugh at art. It should be a fucking License-To-Kill type badge so when some uneducated, underpaid glorified usher runs up to quell the din, we can flip it out and continue on our merry way, retaining our joviality whilst said usher hops off to bother some tourists. (Hey, no touching!) One can dream.

So we pretty much go through the place, checkin' out the ladies and the artstuffs, talking to whomever, such as the guards. Some were in a bad way, man. They were forced to stand while wearing suits under sweltering heat, with only some of the tackiest shit in history to look at.

The walk began with Egypt and its plain, boring pots. Which was odd. Even though Egypt does have some fancy iconography, one would think that the museum would start with Sumeria, which was somewhere further along. The cuneiform (as well as the pottery) was far more interesting. You can't fuck with the Cradle - not even its direct descendants. A quick note about ancient civilizations: 32,000 years ago, we started with pictures on the wall to express oursevles and communicate in the best way possible. 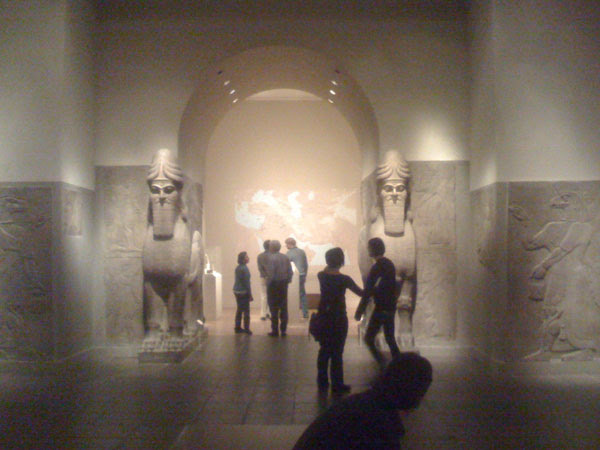 26,000 years later, the Sumerians stopped fucking around and noted: "Pictures are for third graders!" So they formed cuneiform to better express how they felt, and it was glorious. Then the Egyptians came along some three thousand years later and went back to pictures, and totally derailed development for a very long time. They made up for the regression with their "papyrus", I guess. Except for the fact that stone was forever, and papyrus tended to dissolve in moist air. Lesson? Ancient Sumeria is the winner in the Sumeria vs. Egpyt bout. Third round, by KO.

Please turn the tape to continue on to part two.